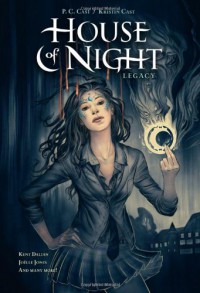 House of Night Legacy serves as a bridge between Marked and Betrayed. Zoey is feeling nervous and antsy about becoming the leader of the Dark Daughters and the powers that surrounded her and her friends on Halloween night. House of Night: Legacy gives us answers that were only loosely given in Betrayed as then, Zoey was spending most of her time flopping between her emotions for her almost ex boyfriend, her almost boyfriend and her teacher. with Legacy, I feel it did a decent enough job with the story and plot though there were some inconsistency between the pictures and it's text counterpart.

For instance, Zoey barely acknowledged the Handbook's existence in the novelizations, often relying on Darius, Aphrodite, Erik or Stark to fill her in on things either gathered from being an adult vampyre or from directly reading the materials given to them. With Legacy, we visit the handbook in each graphic novel to get a story from the history of vampyre's so that Zoey could learn a lesson to apply to life as well as getting some background stories on the first element users. Honestly, this was something that the Cast's could have written a book about. It filled out the story better than what we got in Betrayed. While Betrayed told us about Zoey being nervous, most of her research was done online and told us nothing about the more important figures in their history.

The characters themselves weren't nearly as bad in Legacy as they were in the first 8 books of the novelization. Damien's homosexuality was only brought up once, Stevie Rae had a little more screen time towards the end of Legacy that showed her having prophetic nightmares about her own death, and the twins were still hive mind but with each book being around 40 pages, they cut back on a lot of them checking for hot guys.

While I felt like this was a mostly positive step, I felt like the bastardization of much of the lore was punch to the gut. I've always felt on the medium about Nyx, but bringing up Norse mythology, Celtic history, The Odyssey, Cleopatra and Anthony, and the Amazons? It felt like a cheap gimmick so they didn't have to flesh out real characters to suit their story. Then again, with what we're given in the novelizations I'm not surprised.

The artwork is nothing to sing home about. The panels set in modern times often have the characters heads looking too big for their bodies, their noses shaded funny and their feet looking out of proportion as well. During the 'history lessons' the artwork evened out, but the artwork left a lot to be desired. I liked how the artwork changed to reflect the times, but it felt inconsistent that it would have so much that was well drawn only to have it fall off the ball at other times.